Hungary: Our orange is a lemon

It's a thing. The Hungarian Orange. It's Hungarian. And it looks like this: 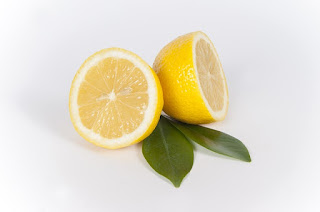 (For those of you wondering: Yes, that's a lemon.)

It's not exactly a translation mistake, rather a running joke left over from the communist era from a movie called The Witness. The movie is a satire, guess what, about the communist system. And to a smaller extent still applies to politics in general. Go figure.
(For those of you slow on history, no, Hungary is not a communist country anymore.) 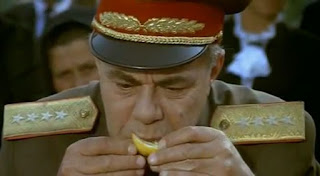 At some point in the movie, the leader of the Hungarian Orange Research Institute, tasked with the creation and cultivation of Hungarian oranges (so we don't rely on import), has to present the year's first orange harvest to Comrade Bástya, supreme military leader. Unfortunately his children ate the only orange that the orchard managed to produce (no, Hungary does not have the ideal climate to produce oranges that are not sour enough to make your butt clench up). Scrambling to avoid admitting failure in the last minute they present a lemon instead. When the leader tastes the lemon and demands to know what the hell it is, they answer:

"This is the new Hungarian orange! A little bit yellow, a little bit sour, but it is ours!"

This is only one of the many lines that became iconinc from the movie, and is still used to describe failures that are dressed up as successes for political gain.

(Hungarian Orange is currently the title of a newspaper that writes about culture, politics, economy, and other serious topics. It used to be the newspaper of the young democrats' party. Go figure.)
Posted by A Tarkabarka Hölgy at 2:55 PM No comments:

Okay so this is probably not a solely Hungarian thing, but my American friends seemed to like the idea.
Of bacon instead of s'mores.

First up, we need to make a distinction between 'bacon' as the Americans see it:

And 'bacon' as Hungarians see it: (By the way, we also have a town called Szalonna - Bacon - in Hungary. We are just that cool.)

Now that we have agreed on the definition, here is the great big revelation: We cook bacon at campfires. In fact, that's pretty much the only thing we cook. The first time I was invited to a campfire in the USA and the table was covered in chocolate, marshmallows and biscuits, I had to reboot my brain. What the heck, people, where is the bacon?!

The technique is pretty much the same: you take a stick, stick the bacon to the pointy end, and hold it over the fire. The fat starts to melt and drip, which is why you need a nice big slice of bread to soak it up. It gives the bread a nice salty taste. You wait until the bacon is all dripped out and starts to turn tasty red (occasionally black, although unlike with marshmallows we try to avoid that). Once it is done, you put your slice of bacon on the bread, and ta-daa! Eat.

Of course, just like with s'mores, there are additional ingredients involved. You can put onions on the stick to add flavor, and many people also sprinkle paprika on the bread. Sometimes we add pieces of sausage, or even mushrooms.

Very important!
The bacon (as one of the four main food groups next to chocolate and pizza) is an integral part of the food making process. I am saying this because once upon a time when my class was instructing our foreign teacher how to do all this, he got the false impression that all we need is the dripping fat, and when the bacon was nice and toasted, he tossed it in the fire. We might have cried. There is only so much you can explain through pantomime.
Rule No. 1: Keep. The bacon.
Rule No. 2: Learn languages, kids. If you don't, bacon might go to waste.

Hungarian health food for everybody.
Posted by A Tarkabarka Hölgy at 3:29 AM 2 comments:

Let's talk about the mop in the room

This blog came into being with a destiny: Promoting and perpetuating Hungarian curiosities, peculiarities, and weird stuff.

(The native term for all of these specifically Hungarian things is "hungarikum," hence the address of the blog, don't say you did not learn anything new today).


However, before we start on our quest, we need to talk about one of the few, and possibly the most well known specimen of hungarikum of all:

(Also pictured permanently on the right)

The above are all search terms that regularly bring people to my other English blog, so I decided it was high time to put them to good use and educate the virtual masses about what makes Hungary Hungary, above and beyond tiny neurotic dogs with their own 1.5 million Facebook followers.
But first, let's talk about the dogs anyway.

If anyone is qualified to talk about the puli, I would be one of them: when I was growing up, my grandparents were breeding the little Rastafarian critters in great quantities. In the mama dog's eyes, I was one of the litter, and I acquired a great deal of early knowledge of anatomy by sticking my fingers into her nose and ears. The puppies came and went, usually bought by foreigners, which always gave me an unspoken anxiety that they will end up with Cruella DeVil who was going to fashion a new line of braided felt coats out of them.
According to my mother, children who grow up with dogs will take on the dog's personality, which would explain a lot about why I am constantly hyper and have a compulsive urge to herd people into groups (my sister, on the other hand, grew up with a bobtail, and she is as chill as they come).
Puli are legendary for being smart, being fast, being good at herding sheep, and being owned by Mark Zuckerberg. For centuries they were the faithful companions of shepherds, which they like to remind you of by nipping at your ankles if you stray too far from the rest of the family. Although they definitely look cool with dreads, they like to have their fur cut in the summer. They bark a lot and chew on things. That's pretty much all you need to know.
Oh, and one more thing:

Sure-fire tips for telling which end of a puli is which: