Still on the topic of fast food, and the pictures I took this summer: I was lucky enough to be in my country when McDonald's announced their American Weeks.
(I ignorantly have been assuming all this time that McDonald's WAS American Weeks...)
The question lingers: How do you make the Golden Arches MORE American?
(While at the same time also making it Hungarian-friendly)? 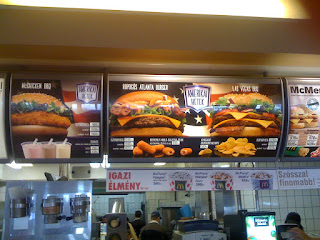 First off: AMERICAN FLAG AS A BACKDROP FOR BURGERS.

Second: McChicken BBQ (BBQ is a very American thing in our eyes)

Fourth: Las Vegas BBQ (MORE BBQ) (I don't even know how to spell the full word)

Fifth: Beverly Hills Cheese Bites (filled with ketchup) and Chicago Potato Chips (no footnote to explain what makes them Chicago, I feel lost now)
(Chips are also not a side that you normally get in Hungary)

AAAAND
at the same time

PÖTTYÖS McFLURRIES!
These are Túró Rudi (cottage-cheese-and-chocolate) flavored flurries. I have been over the cult status of Túró Rudi before.

This whole thing made me feel incredibly American and incredibly Hungarian ALL AT THE SAME TIME.
Good job, Meki.
Posted by A Tarkabarka Hölgy at 12:00 AM 3 comments:

So, a while back, I did a post on non-Hungarian cartoons that I grew up with as a 90's kid in Hungary - mostly to introduce my American friends to what children's TV used to look like in my corner of the 90's world. I chose the "non-Hungarian" theme because I am still thinking about doing all the Hungarian cartoons for A to Z at some point (maybe next year). But of course one post could not cover all the nostalgia I have, so I finally got around to making  a second batch.
Theme of the day: Cartoons with repetitive music that will slowly drive the parents mad.
(Again, links point to YouTube videos)

The Little Mole (Krtek) is one of the national symbols of Czech culture. No, really. You know you see Smurfs everywhere when you go to Belgium? Well, Prague for example is full of Krtek. My little sister is a devout worshipper of the critter. There is barely any talk in most episodes (except for the most famous one, Little Mole's Trousers, in which Krtek gets help from various animals to go through the process of turning flax into trousers)(this is how most kids my generation learned the principles of clothmaking, and some of us can still recite it: The flax grew, the frog soaked it, the sun dried it, the stork broke it, the hedgehog stripped it, the spiders spun it, the ants wove it, the crab cut it, and the warbler sewed it. Ta-da!). Some episodes are more confusing than others: My favorite is the one where we learn how babies are made via the love story of two bunnies, and the brutally graphic scene of Mama Bunny giving birth. You're welcome.

This cartoon is about an adorable family of shape-shifting blobs: Barbapapa, Barbamama, and all the little Barbas with their different colors and personalities. What sticks the most about it is the opening song which you will never get out of your head. Neither will your parents.
(I absolutely loved this as a kid)

Jamie and the Magic Torch (British)

Possibly one of the most psychedelic kids' shows I've every seen, in the grand tradition of Alice in Wonderland. Jamie, and his Old English Sheepdog Wordsworth (because who else) (in Hungarian he's called Sajó) go on nightly adventures with the help of a magic torch into Cuckoo Land. It is one of those strange shows that have narration instead of solely dialoge, which is just one of the many things that weirded me out about it. On the plus side: This cartoon is still the single best reference point for explaining people what kind of a dog I have. "So, what breed?" "A bobtail" "What's that?" "Sajó, from Jamie and the Magic Torch" "OOOOH!"

And while we are on the topic of magic objects, here is another children's classic, this time from our good friends the Polish people. This series tells stories about a boy who gets into various kinds of trouble, and solves them by using a magic pencil (given to him by a tiny dwarf that randomly pops into existence) - whatever he draws with it comes to life. The discussion on why he chooses to draw certain objects but not others is a constant pastime among kids watching the show. Also, why he never just draws a bunch of money for himself or something.
Once again, no voices, and music that you will never get out of your head. But it made all of us kinds want to experiment with drawing things that might come to life.

Another no-talking Polish cartoon series kids could not get enough of (I feel like the Polish have found the ultimate secret to easy international distribution - no words to translate at all). The show deals with the - sometimes magical - adventures of two kids who are friends and possibly brothers (I was never quite clear on that), underscored by the obligatory cheerful repetitive music. They have kind of a love-hate relationship and the older one bullies the little one sometimes.
They are probably brothers.
(You remember that one line from Supernatural where Dean Winchester says "There are two things that I know for certain, one: Bert and Ernie are gay"? Well, the Hungarian dubs for Supernatural translated that as "Lolka and Bolka are gay" - since no one knows Bert and Ernie in Hungary -, effectively making all of us nineties kids twitch around the eyes a little.)
(Maybe I'll make a separate post about strangely replaced pop culture references in Hungarian dubs...)

I feel like there are still more cartoons to share. I'll make a third installment in this series at some point.
Enjoy!
Posted by A Tarkabarka Hölgy at 7:58 AM 3 comments:

When I see signs like THIS at my doctor's office, I realize that I will never convince foreigners all Hungarians are not vampires... 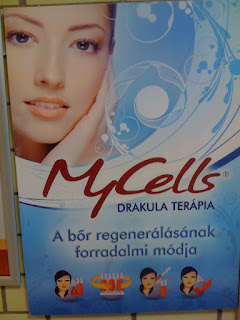 Come to Hungary and stay young forever, people!
Posted by A Tarkabarka Hölgy at 4:27 AM 4 comments:

MopDog Monday: Our KFC is better than your KFC

It is always the most fun part of the semester when I reveal to American students that fast food chains serve different menus depending on the country they are in.

The first time I was in the USA, and I suggested we should eat at KFC, I was completely baffled by the confused and disgusted looks from my American friends. The conversation went something like this:

So, in order to prove that I am not making it up, here is what a KFC menu looks like in my home town in Hungary: 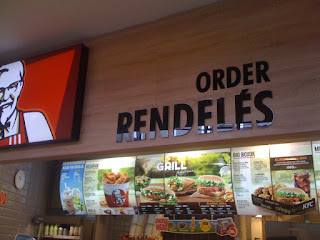 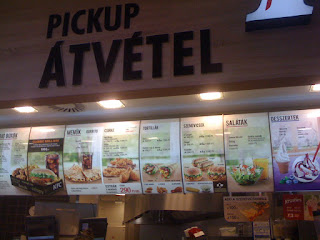 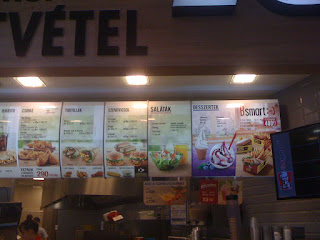 They has Asian Weeks until last week. With dumplings and teriyaki chicken wraps. Just sayin'.
Posted by A Tarkabarka Hölgy at 12:00 AM 6 comments: