MopDog Monday: Does your dog call you Mom?

One thing that constantly trips me up about English-speaking pet owners is that they don't have a pet-specific term of affection. In addition, in cases like me and my family where the pet talks back, they don't have a word for that either.
(Other than "possibly crazy")
I keep hearing people refer to pets as their "babies," and hearing pets refer to their owners as "Mom," "Dad," and "Grandma." No matter how much I try, I just can't get used to that - because I feel like there is a word missing. A word that does exist in Hungarian.

Therefore, I would like to use today's post to introduce the English-speaking world to an extremely useful term:

Gazdi is a pet-specific word for pet owners. It is a nickname derived from the word "gazda" which means "owner" (also means "farmer" in certain contexts, but that's another story). While "gazda" can be applied to various things and inanimate objects, "gazdi" specifically refers to owners of pets.
In Hungarian, if you talk to your dog and your dog talks back - in a voice that sounds suspiciously like yours except higher/lower pitched -, your dog will most likely call you "gazdi" and not "Mom."

Go ahead, give it a spin. See how it feels. Flaunt your knowledge of unique Hungarian vocabulary ("It's an old Hungarian term, impossible to translate I'm afraid...").
Ask you pets for their opinion. 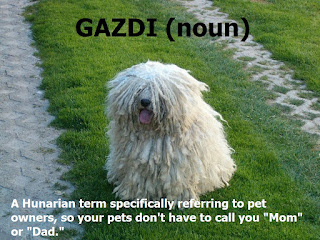 Rigó Jancsi - a sinful dessert with a side of scandal

My family has a long tradition of making this famous dessert. My grandfather passed it on to my parents, who passed the recipe on to me. I am still trying to get the hang of it, but when it is done right, it is the most delicious thing you've ever tasted.


(It was also the wedding cake at my parents' wedding, until the Best Man accidentally sat on it)

Rigó Jancsi is a chocolate sponge cake filled with sinful amounts of cocoa cream and covered in dark chocolate. So, basically, it is chocolate within chocolate topped with more chocolate.
What's not to love?

And not only is the pastry delicious  - it also has quite the amazing story behind the name.

Rigó Jancsi, the person the dessert was named after, was a Gypsy musician in the 19th century (1858-1927). He was a natural talent - started playing the violin at age 5, started his own band in his early 20s, and soon became the favorite of Budapest coffee houses (and women). In 1896, while playing in Paris, he met Clara Ward, the daughter of a Michigan millionaire, who was married to the Belgian Prince of Caraman-Chimay. On that fateful day the musician and the princess fell in love, and thus kicked off one of the largest social scandals of the century. Clara divorced her husband (leaving her two children behind), Jancsi divorced his wife, and they got married soon after their elopement.
(Imagine, if you will, Kate Middleton running away with a bar musician)
As much fun as all this sounds, they did not exactly have a fairy tale life. They soon ran out of money (spending more than eight million dollars traveling around and livin' it up), and Clara started posing for pictures and modeling in places like the infamous Moulin Rouge. Her pictures stirred up even more scandal, and were even banned in some places. Eventually the relationship crumbled, and after Jancsi was repeatedly unfaithful to her, Clara left the marriage in Naples, running away with an Italian waiter. Jancsi kept wandering, playing music, and seducing actresses, until he died poor and forgotten in New York. He is buried in Manhattan.

Wait, but why the dessert?

The pastry was created by a Budapest chef who named it after Rigó Jancsi, who - according to legend - brought his lover to the restaurant to dazzle her with sweetness (saying that the pastry was "brown like his skin, and sweet like her heart"). The pastry became successful, and the name stuck around.

Here are some sites that give you the basics of how to make Rigó Jancsi:

For comparison, here is our own recipe:

Line pan with baking paper, pour batter into pan
Put it in the oven for 35-40 minutes (DON'T OPEN THE OVEN)
When the top of the cake starts wrinkling, but is not burnt brown yet, take it out, flip it on a grate, peel off the paper, let it dry and cool

Pour about 14dl whipping cream into a bowl
Whip it up until it is thick (if you put your finger into it, it gets coated in cream)
Add 3-4 tablespoons of sugar and 2-3 tablespoons of cocoa powder (just mix these in, don't whip)
Melt a packet of gelatine and mix it in rapidly
Put the cream into the fridge for about 20 minutes to thicken (until you can put your finger in in and it leaves a dent)

Repeat attempts until the cake tastes good. Don't despair. My first try leaked through the boards of the kitchen table.
(It was still delicious)
Posted by A Tarkabarka Hölgy at 12:00 AM 3 comments:

A big accomplishment for a small country. Cue the celebration!
Everyone is really excited for the Oscars now.

Son of Saul has also been named No. 1 of the 50 best films in the US in 2015 by The Guardian.
You can watch the trailer here:

Are you doing a reading challenge in 2016? 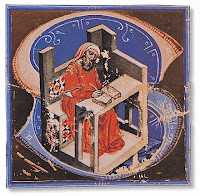 Recently I have seen more than one article about reading diversely. There was even a TED talk about reading a book from every country in the world. So, in case you are one of the people venturing into World Literature this year, here is your helpful little guide to Hungarian lit available in English. I don't aim to make a full list (although it wouldn't be as long as you think, sadly), I just want to give you some options that you might not come across otherwise.

Nobel winners
We have exactly one! Awarded in 2002, "for writing that upholds the fragile experience of the individual against the barbaric arbitrariness of history."

Mandatory reading in Hungarian schools
(I have written earlier about our mandatory readings in World Literature.)
NOTE: Some of these are actually free on Kindle or online! See links.

The Eclipse of the Crescent Moon by Gárdonyi Géza (historical fiction about the Turkish wars)
The Baron's Sons by Jókai Mór (historical fiction about the 1848 Revolution)
The Man with the Golden Touch by Jókai Mór (novel that is... hard to explain, I probably blanked it out)
Please, Sir! by Karinthy Frigyes (collection of short, humorous sketches about school at the turn of the last century)
The Viceroy by Katona József (historical drama about the queen that we hacked to pieces) (also an opera)
The Tragedy of Man by Madách Imre (dramatic poem about Adam and Eve getting a flash-forward of history)
The Siege of Sziget by Zrínyi Miklós (Baroque epic about an epic siege during the Turkish wars)
Csongor and Tünde by Vörösmarty Mihály (A fairy tale - based drama in verse)
One Minute Stories by Örkény István (short, sometimes sarcastic, sometimes humorous stories)

Female authors
(We are shamefully low on female authors included in the curriculum, and even worse off in English translations)

Pretty much anything by Szabó Magda that you can find in English
(For female poets, see the collections above)

Actually good books that are not mandatory reading

The Gold Coffin by Móra Ferenc (Roman-era Christian historical novel and cute love story)
Pretty much anything by Szerb Antal (but especially Love in a Bottle, a collection of short stories)
Slave of the Huns by Gárdonyi Géza (historical novel set in the camp of Attila the Hun)
The Adventures of Sindbad by Krúdy Gyula
Posted by A Tarkabarka Hölgy at 12:00 AM No comments:

Help me pick the MopDog A to Z theme!

It's officially 2016, which means, it's time to gear up for the April A to Z Blogging Challenge!

Since last year's theme - "26 Ways to Die in Medieval Hungary" - was super fun (and also fairly popular), I am definitely doing another MopDog challenge this year. The only question is: What will my theme be this time?

Since it is fairly early yet, and I have time to plan and ponder, I wanted to post my ideas, and ask for your input.
Here we go!

"26 Lessons You Learn from Hungarian Cartoons"
Each post introduces a beloved (and, to foreign eyes, no doubt strange) Hungarian children's cartoon, and draws an important life lesson from it.
Pros: It introduces amazing Hungarian animation to a wider audience. Also, supplies a whole lot of useful phrases, like this one.
Cons: Most cartoons are not available with subs/dubs. Although maybe this would put the call out to the Universe.

"26 Flavors of Fake Hungarian History"
Each post introduces a crazy theory about the (much debated) origin and early history of the Hungarians - from sources that actually claim to be scientific and have been published on paper. Includes puli dogs from Mars, and Hungarians building the pyramids.
Pros: Hilarity.
Cons: I don't know how appealing this is to non-Hungarian audiences.

"26 Hungarian Saints (?)"
Saints, Blesseds, and Honorable Mentions produced by Hungarian history. With all their not-so-saintly laundry.
Pros: We have some fun ones (I grew up Catholic, saints are out main form of entertainment)
Cons: I'd have to finagle quite a few (8-9) of the letters.

"26 Badass Hungarian Women"
For the feminist in your life who wants to have an international perspective.
Pros: Women's history!
Cons: Again, not sure about the international appeal. Also, needs some serious research.

NOTE: If you have any other ideas for Hungary-related themes that you'd enjoy reading, let me know! Just... for the love of God, please don't make me do recipes.
Posted by A Tarkabarka Hölgy at 12:13 PM 13 comments: