MopDog Monday: Everything but the kitchen... pig?

You know that thing in the kitchen sink that goes KKKRRRRRR and in every horror movie someone puts their hand into it and then there is blood everywhere?
(I blame Supernatural for never ever having one in my own kitchen)

You call it "garbage disposal."

We call it "konyhamalac" - which literally means "kitchen piglet"

(It's the official designation of the appliance)

Incidentally, we also call people "konyhamalac" if they are the designated person in the household who eats the leftovers - and the foods that have been in the fridge for slightly longer than what you are comfortable with but they are completely fine with it. Cast iron stomach. In-house cleaning service. Every household has one (they often double as a boyfriend.)

I was surprised the first time I used the English term "kitchen pig" and got a lot of confused stares from my American friends. I somehow assumed it was a term of American origin - since every time I hear it, I have flashbacks to the Flintstones:

Now, I can't tell if the Hungarian term originated from the Flintstones, or is something completely separate and accidental... but seems like it is here to stay.
Posted by A Tarkabarka Hölgy at 12:00 AM 4 comments:

Do you like words in other languages that are impossible to translate, but describe very specific things very well?
Here is one to kick off your week: 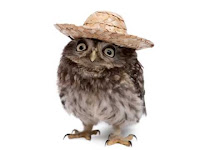 Literally means "bird-seen," "seen by the birds." It refers to food that you took with you somewhere and then didn't eat so you took it back home.
For example, if you take a sandwich to a field trip, and then forget to eat it all day and you bring it back home in the evening, you might feed it to your dog saying "here, have some madárlátta." The term originates form the time when people went to work on the fields all day, and returned home in the evening, sometimes with leftovers from their lunch.
Posted by A Tarkabarka Hölgy at 12:00 AM 7 comments:

MopDog Monday: Hungarian names for all your fantasy novel needs

It is a running joke in Hungary that George R. R. Martin used "exotic" Hungarian names for a fantasy novel - both János (as in Janos Slynt) and Sándor (as in Sandor Clegane) are very common names in our little corner of the world.
This also explains why most of us refer to the Hound as "Sanyi."

But why stop there? Aren't you tried of Anglo-Saxon/Celtic sounding fantasy names yet? Well, in case you are, here is a list of bona fide Hungarian(ish) names that you can pick to use in your epic fantasy that will topple Game of Thrones from the top of the charts.

Or, you know, whatever.

The list is incomplete and very subjective. I was trying to pick some that would sound nice/funny/interesting to English speaking people. If you want more, click here.

Girl names:
You will notice that a lot of them end with -ka or -ke. This is a common way in Hungarian to make endearing nicknames, or add "little" to the name's meaning.

Aporka - female version of a male name meaning father (also a family name)
Aranka - nickname from "arany" which means gold. Thus, the Hungarian equivalent of Aurelia
Bíborka - recent revival of an older name, means both purple and an expensive type of cloth (think Tyrian purple)
Boglárka - popular and recent, from the word that means buttercup
Boróka - nickname for Borbála (Barbara) and also accidentally means juniper
Csenge - this is my name, so obviously any character you use it for has to be awesome by definition.
Csilla - literary creation from "csillag" which means star. Very popular (pronounced with a ch).
Dalma - both a male and a female name, literary creation
Emese - old Hungarian name, has a motherhood-related meaning
Enikő - literary creation from an older name; fairly popular. Incidentally, the Hungarian name of the Flintstones girl child (because "kő" means stone).
Eperke - "little strawberry"
Etelka - a literary creation from a male name.
Gyöngyvirág - if you really want to be cruel to your English-speaking readers (means lily of the valley)
Hajnal(ka) - "(little) dawn"
Hanga - Hungarian for heather
Ilona - the Hungarian version of Helena, except prettier. Also the name of our Fairy Queen
Jolán(ta) - both a name of Hungarian origin, and the Hungarian version of Violante
Málna - means raspberry
Mandula - Literally means almond, famously one of the lovers of the ill-fated King László IV.

Álmos - literally translates into "sleepy," but actually means "dreamed of," name of one of our ancient chiefs whose birth was heralded by a dream
Bánk - a name with a dark cultural connotation, and nothing to do with money
Béla - vampire enthusiasts probably already know this one
Botond - old Hungarian name of a hero that wrecked the gates of Byzantium. Meaning related to mace.
Farkas - means wolf (or something else with a tail)
Győző - again, in case you need a name to mess with English-speaking readership (means victor, winner)
Hunor - traditionally, the ancestor of the Huns
Huba - origin unknown, one of our ancient chiefs
Lehel - the badass guy that killed that other guy with a horn, probably means something soul-related
Levente - popular name, also incidentally an older word used for soldiers
Magor - traditionally, the ancestor of the Hungarians (Magyar)
Nemere - recently created archaic-sounding name, means restless, stirring
Soma - newer name created from the word for dogwood, the Hungarian equivalent of Cornelius
Szabolcs - old Hungarian name of contested origins, and fun to ask English-speakers to pronounce

If you want to read more about the strangeness of Hungarian naming customs, click here for an earlier post.


And now, let the Hungarian conquest of fantasy worlds begin!
Posted by A Tarkabarka Hölgy at 12:00 AM 3 comments:

Translations are sometimes more than just putting the text of the book into another language. For various reasons, it is very common practice to turn names, places, and other proper nouns into new inventions when a text is translated. Sometimes the reasons are related to cultural differences, while in other cases, they are purely artistic.

With the recent, much mourned passing of Alan Rickman, beloved actor who portrayed (among many other iconic roles) Severus Snape in the Harry Potter series, my Facebook feed acutely reminded me that English- and Hungarian-speaking friends had different names for the same character. Inspired by this, I decided to give you some examples of what names we know famous characters by.
Here we go.
(Not including names that are just literal translations of the original)

Harry Potter
The Harry Potter books are famous for their high quality Hungarian translation, and the linguistic genius of its translators who decided (for better or worse) to play around with names.

Hogwarts = Roxfort
Gryffindor = Griffendél
Slytherin = Mardekár (no one is sure about this one, although 'mar' is the verb we use for snake bites)
Ravenclaw = Hollóhát (literally translates into 'raven's back')
Hufflepuff = Hugrabug ('ugrabugrál' is a verb used for jumping/bouncing around)
Severus Snape = Perselus Piton
Minerva McGonagall = Minerva McGalagony ('galagonya' is our word for hawthorne)
Pomona Sprout = Pomona Bimba ('bimbó' means 'bud')
Peeves = Hóborc ('hóbortos' translates into 'quirky' or 'whimsical')

Marvel
Wolverine = Farkas (Wolf) (the Hungarian word for 'wolverine' is 'rozsomák,' which sounds silly to Hungarian ears, but the newer comic translations are using it more often now)
Storm = Ciklon (Cyclone)
Nightcrawler = Árnyék (Shadow) (there was really no good Hungarian word for this one)
Hawkeye = Sasszem (Eagle-eye)

Miscellaneous
Huey, Dewey, and Louie (Duck Tales) = Tiki, Niki, Viki (yes, they sound like girl names to us too)
Pom, Flora, and Alexander (Babar) = Palika, Flóra, Adorján
J.R. Ewing (Dallas) = Jockey Ewing (one of the most famous examples of an English name being changed to something easier for us to pronounce)
Sue Ellen Ewing (Dallas) = Samantha Ewing (same thing, also, Sue Ellen to us sounds like someone is advertising something 'against termites')
Gargamel (Smurfs) = Hókuszpók
Azrael (Smurfs) = Sziamiaú
Cera (Land Before Time) = Kistülök (Littlehorn)
Petri (Land Before Time) = Röpcsi ('Flighty'?...)
Sleeping Beauty = Csipkerózsika (Little Briar Rose) (never understood as a kid why Disney gave her another name)
Hansel and Gretel = Jancsi és Juliska (not in the movie, though, as much as I wanted to see Jeremy Renner yelling JULISKAAA at the top of his lungs)

There are many other examples as well, but let's just leave it at that for now. Does any of them surprise you?
Posted by A Tarkabarka Hölgy at 12:00 AM 4 comments: