A is for the Adventures of Aladár Mézga

Welcome to the 2016 A to Z Challenge! My theme is Crazy Hungarian Cartoons. They are a staple of Hungarian childhood, and also something that Hungary is actually fairly good at. Enjoy!

A 12-year-old Physics genius and a talking dog sneak out in their homemade spaceship every night to go visit mysterious planets.
A short-lived yet much-loved TV show from 1972, the Strange Adventures of Aladár Mézga (Mézga Aladár Különös Kalandjai) is actually a spinoff of an earlier series. Aladár lives with his typically boring family - Mom, Dad, Annoying Older Sister, talking dog - none of whom actually understands the boy genius and his aspirations. (Except for the dog.) 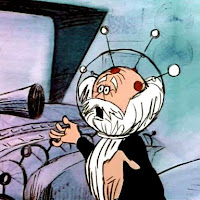 In the original show, the Strange Adventures of the Mézga Family (1969), the family owns a device that can connect them to their great-great-grand-descendant who lives in the 30th century. The old man named MZ/X sends them futuristic devices to make their life easier - but all of them unavoidably backfire sooner or later, and it is usually Aladár who figures out the solution (with the catchphrase "I'll tell you for a Forint") (as the Joker says: If you are good at something, never do it for free).

(This show was so popular that the equivalent of "Earth to XY" in Hungarian is still often "MZ/X, come in, come in") 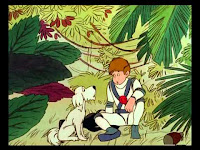 In Aladár's own adventures, the boy and the dog set out every night in an inflatable spaceship to go visit strange new planets. In the first episode, for example (in which the dog doesn't participate - Aladár takes a mouse first to test out space travel's effects on animals), Aladár ends up on a two-dimensional planet ruled by an evil tyrant who only allows one vowel (E) in speech. The episode is visual and linguistic genius: Visual, because all things on the planet are in two-dimensional cross-section (including people), and linguistic because there are entire conversations in eszperente. It is slightly disturbing, but also one of the best episodes of the show.

You can find all 13 episodes online, either on YouTube or here, but sadly, I could not locate English subtitles. The original series, however, does have some subbed episodes on this YouTube channel.
Posted by A Tarkabarka Hölgy at 12:00 AM

Email ThisBlogThis!Share to TwitterShare to FacebookShare to Pinterest
Labels: A to Z, cartoons, CartoonsAtoZ