J is for Justice

Step aside, Justice League - we only needed one guy to get the job done. 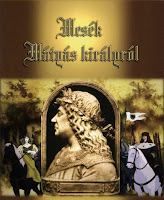 Legendary Renaissance king Mátyás I does what he does best: brings justice to 15th century Hungary.
Mesék Mátyás királyról (Tales about King Mátyás) is a 13-episode cartoon TV series that aired between 1981-1983. Each episode is about 8 minutes long, including the medieval-style sung intro and the credits. 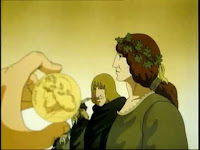 Mátyás was a real life king, one of the most famous in Hungarian history. If you remember my "26 Ways to die in medieval Hungary" theme last year, you probably remember his fairly gruesome death. There is a saying about it:
Meghalt Mátyás, oda az igazság!
Mátyás is dead, justice is dead!

Referring to the hundreds of folktales that paint him as just, honorable, clever, wise, and almost trickster-like in many ways.

Each episode of the series adapts a famous folktale about King Mátyás and his adventures. They are mostly narrated by Mátyás' court jester (who occasionally notes that they are not entirely true, just to be more meta about it). Some are well known folktale types, such as Queen Beatrix's trick - the story of the Clever Wife, who is chased away by her husband, but she is allowed to take "whatever is dearest to her" from the palace - and she takes the husband himself. It was a nice touch to include this story, since Beatrix is not usually portrayed positively in the Mátyás tradition (again, see the death story).

One of my favorite episodes is The nameday prophecy (névnapi jóslat), in which Mátyás disguises himself as a commoner and goes to market. An old Gypsy woman reads his palm, telling him that if he does not steal something before his nameday (the next day), he will die. He goes to steal a spoon from the treasurer, for a joke, but while there he overhears the man plotting to poison him. So the prophecy, in fact, does save his life, and he grants access to the palace to the old woman's entire family. The matron tells him at the end of the tale:

"As long as Hungarian people live on this land, they will always say your name as Mátyás the Just."

You can watch all episodes in Hungarian here. 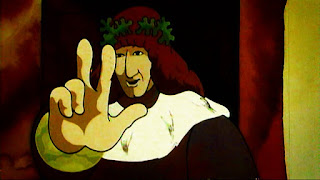 Posted by A Tarkabarka Hölgy at 12:00 AM