Last day of the 2016 A to Z Challenge! Thank you all for visiting and leaving comments! Come back on May 9th for the Reflections! 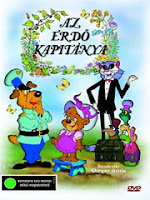 When legendary criminal cat Zéró decides to sell a national park forest (and gated community) for profit, he can only be stopped by a Captain on the verge of retirement, the forest president's little granddaughter, and a handful of enthusiastic friends.
Az Erdő Kapitánya (Captain of the Forest, 1988) is a feature length animated movie that promotes the importance of the environment (among other things). It plays a lot on police movie tropes, such as "two weeks from retirement."

Once again, the cats are the bad guys: Zéró is the head of a crime network, and keeps evading capture by the upstanding members of the Police: The Captain (a dog), Ede the Corporal (a mouse), and the Emergency Signal (an owl). This formidable team is aided by Goliath, a flea, who is supposed to spy on the cats, but gets himself captured and sent back to the police under a stamp on an envelope. He finds out enough, however, to know that Zéró's aim is the Forest, so the Captain fakes retirement to get temporary housing in the gated community (since they are outside the city's jurisdiction). 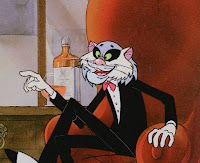 At the forest, Captain makes friends with the granddaughter of the Forest President (an old and strong bear lady). Dorka is super excited about being friends with a real life cop. He also befriends Dini, the Bat, who helps him build a house on the island assigned to him - and obviously he builds it upside-down, but the good-natured Captain doesn't complain. We also get to encounter Pimpike, the Blue Bird of Happiness (a former wolf who ate a whole lot of poisonous shrooms and got an identity crisis). 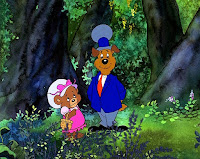 All kinds of excitement ensue - chases on land and water, kidnappings, mayhem. Zéró almost succeeds at selling the entire forest to a landscaping company for immediate demolition... but in the end, the Captain stops him. After the excitement is over, the Captain decides to actually retire, and move into the Forest permanently.

This is a very adorable movie, and one of my favorites. I wish there was an English dubbed version...
Posted by A Tarkabarka Hölgy at 12:00 AM

Email ThisBlogThis!Share to TwitterShare to FacebookShare to Pinterest
Labels: A to Z, animation, cartoons, CartoonsAtoZ